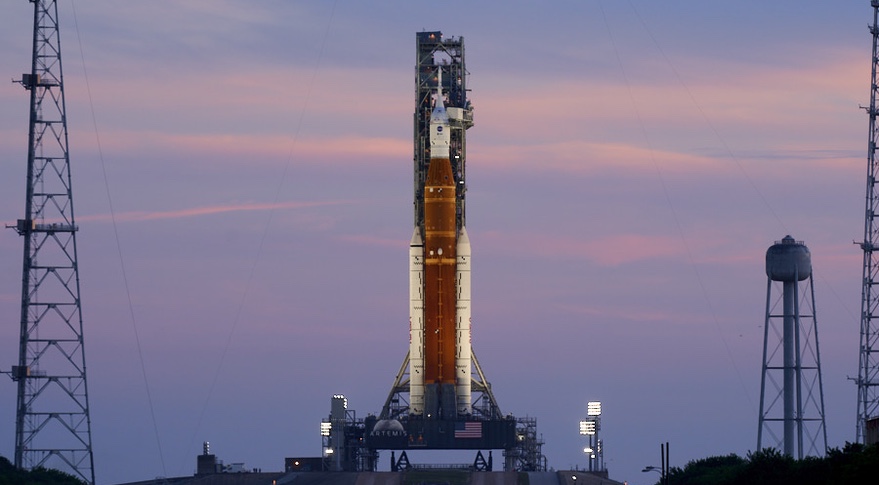 WASHINGTON — NASA has called off plans to attempt to launch the Artemis 1 mission on Sept. 27 as a tropical storm, with the potential to become a major hurricane, heads for Florida.

NASA announced Sept. 24 it would not proceed with the next launch opportunity for the mission, which was Sept. 27 at 11:37 a.m. Eastern. It cited the threat posed by Tropical Storm Ian, currently in the Caribbean Sea. Forecasts by the National Hurricane Center show the storm moving north, then curving northeast to reach southern and central Florida by the middle of the week as a major hurricane.

While NASA won’t proceed with a launch on Sept. 27, it deferred a decision on rolling the Space Launch System rocket and Orion spacecraft back to the Vehicle Assembly Building (VAB) at the Kennedy Space Center to protect it from the storm, while continuing preparations for a rollback. NASA said in the statement it would wait until Sept. 25 to make that decision “to allow for additional data gathering and analysis.”

At a Sept. 23 briefing, NASA officials said their preference was to leave the SLS at Launch Complex 39B. Doing so could preserve a final launch opportunity in this window Oct. 2, while rolling the vehicle back to the VAB could make it difficult to attempt a launch in the next window in the latter half of October.

At the briefing, Mike Bolger, manager of the Exploration Ground Systems program at NASA, noted the vehicle is rated to handle wind gusts of up to 74 knots (137 kilometers per hour) at the pad. “Right now, we don’t have a forecast that shows winds gusting higher than 74 knots coming across the Kennedy Space Center,” he said.

“We do have a certified design with factors of safety to those peak gusts,” said John Blevins, SLS chief engineer. “Ultimately we have a pretty robust vehicle, and we’ll just have to keep looking at that forecast to see if we fall within our certified parameters.”

Agency officials seems curiously dismissive of the threat posed by the storm, which at the time of the briefing was still an unnamed tropical depression but forecast to strengthen significantly in the coming days. “It’s not even a named storm. It’s Tropical Depression Number Nine,” said Tom Whitmeyer, deputy associate administrator for common exploration systems development at NASA Headquarters. “It’s very early in, and some of the traces we see go in different directions and go at different speeds.”

“I wish we were better at predicting weather absolutely five days in advance,” he added, noting that if he could, “I would pretty much quit this job to go work for the weather bureau.”

In a statement after the briefing, NASA appeared to do some damage control. “NASA is grateful to its agency partners at NOAA, United State Space Force and the National Hurricane Center for giving us the highest quality products to protect our nation’s flight test to return us to the Moon,” the agency stated.

Weather turned out to be the biggest constraint for the launch after overcoming issues with hydrogen leaks and securing a waiver for the rocket’s flight termination system.

At the Sept. 23 briefing, officials said they were satisfied with the tanking test two days earlier where the rocket’s core and upper stages were filled with liquid hydrogen and liquid oxygen. NASA said the test accomplished all the objectives despite hydrogen leaks encountered during it.

“All in all, it was a good day. We’re very happy with the results,” said Brad McCain, vice president and general manager of Jacobs Space Operations Group. “We’re very optimistic about our next launch attempt.”

He and others said they were still in the process of learning how to best load propellants into the vehicle, something that requires practice. “The pressure and temperature of that seal — any seal in cryogenics — is always going to be tricky,” said Blevins. “Sometimes it takes a while to find out the stability points.”

With the shuttle, said McCain, “it took a lot of tankings to get it right, get it consistent.”

Blevins said that NASA also overcame another obstacle to the launch by securing a waiver from the U.S. Space Force, which operates the Eastern Range, for the SLS flight termination system (FTS). That system was certified only through the end of the previous launch window that ended in early September, but NASA had been in discussions with the range to show that the system would still operate should the vehicle launch in late September or early October.

“We have received approval for the launch attempts that we have on the books,” which at the time was Sept. 27 and Oct. 2, Blevins said. “They did a lot of work to help us get to where we are.”

He did not state if that waiver would be good if the launch slips later in the year. However, should NASA decide to roll the SLS back to the VAB, Whitmeyer said that workers would service the FTS and effectively restart the clock on its certification for a later launch attempt.

“I don’t want to go into any details because it’s just not pertinent here,” Blevins said of the work to secure the FTS waiver, adding that disclosing any details would be “silly” given the number of parameters involved in the Space Force analysis of the waiver request. “They have an incredible mission and they do a good job at it. I’m really glad we had enough information to provide the public safety assurance they get to grade.”