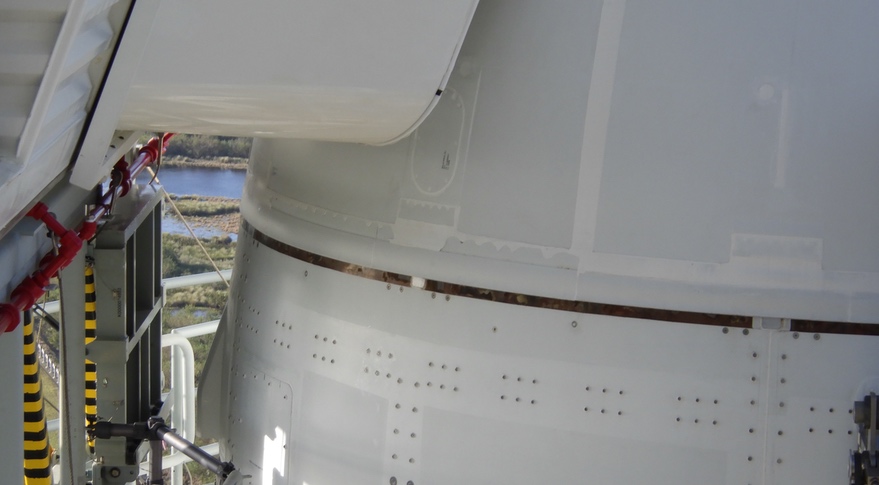 KENNEDY SPACE CENTER, Fla. — NASA is proceeding with its next Artemis 1 launch attempt on Nov. 16 after concluding that loose caulk on the Orion spacecraft did not pose a significant risk.

At a briefing late Nov. 14, NASA managers said they were continuing preparations for the launch, scheduled for 1:04 a.m. Eastern Nov. 16 at the start of a two-hour window. Weather forecasts project a 90% chance of acceptable conditions for the planned launch.

The briefing took place after a mission management team meeting to discuss two remaining issues not resolved a day earlier. One involved an electrical connector for the hydrogen tail service mast umbilical on the launch platform, which showed transients when powered up. Technicians had changed out a cable in the system overnight.

The second, and more serious, issue involved loose material called room temperature vulcanizing silicone, or RTV, on the Orion spacecraft. That material, a type of caulk, seals a gap between the Orion crew module and its launch abort system. About three meters of RTV came loose during Hurricane Nicole, raising concerns more could come off during flight.

“We needed a little bit more time to review our flight rationale,” Mike Sarafin, NASA Artemis 1 mission manager, said at the briefing. “We agreed that the risk was bounded by current hazards.”

He said that, with no ability to repair or remove the RTV material while the vehicle was at the pad, the agency said it accepted the risk that more material might come off during launch and hit other components of the vehicle. “We’re comfortable flying as-is,” he said.

The concern is that more RTV could come off during a brief phase of flight, as the Space Launch System accelerates from Mach 2 to Mach 3.5. The atmospheric density is still high enough in that phase that any material that comes off would be slowed down, creating a stronger impact.

The most likely part of the vehicle any material would hit in that scenario is the launch vehicle stage adapter, a conical section between the core and upper stages. That adapter is “a very robust piece of hardware,” Sarafin said, making it unlikely an impact would cause serious damage.

Engineers also evaluated potential impacts on the core and upper stages and the interior portions of the boosters. “All of those were enveloped by other debris sources and other hazards and risks that we had,” he said.

The RTV is installed to cover an aerodynamic gap between the Orion crew module and launch abort system. “You want a very smooth outer mold line so you don’t trip the boundary layer or cause acoustic noise issues and thermal heating,” said Jim Geffre, NASA Orion vehicle integration manager, in a Nov. 14 interview. “To seal that interface, we apply a thin skim coat of RTV all the way around.”

Any loss of RTV doesn’t pose an aerodynamic issue for the vehicle, though, Sarafin said, based on aerodynamic modeling. “This was just a way to reduce the aerodynamic turbulence and flow in that particular area,” he said.

NASA is still studying how the RTV came off during the storm, when it was subjected to only a fraction of the force it will experience during launch. “I think it’s a combination of the direction and the intensity for how long it lasted,” Geffre said. The portion of the RTV that came off was on the side that faced the brunt of the hurricane’s winds.

Meanwhile, replacing the electrical cable did not resolve the issue with the connector for the hydrogen tail service mast umbilical, Sarafin said. “We’re still seeing some funnies on that particular umbilical,” he said, but the system has sufficient redundancies to not pose an issue.

“We know we have redundancy in these other measurements and we are still OK to launch,” said Jeremy Parsons, NASA Exploration Ground Systems deputy program manager. “The unanimous recommendation from the team is that we were in a good position to go ahead and proceed with the launch countdown.”

Sarafin and Parsons reported no other issues with the vehicle at the briefing. Parsons said the issue he’ll be watching the most closely in the countdown is the start of loading of liquid hydrogen into the core stage of the SLS, given the problems with leaks in the past.

“I’ll probably breathe a sigh of relief” after that begins, he said. “I feel very confident in the procedures that we’ve worked, but that will be one of those things that will be a big milestone once we get into a steady state fill” of liquid hydrogen. “That’s something we’ll all be watching closely.”