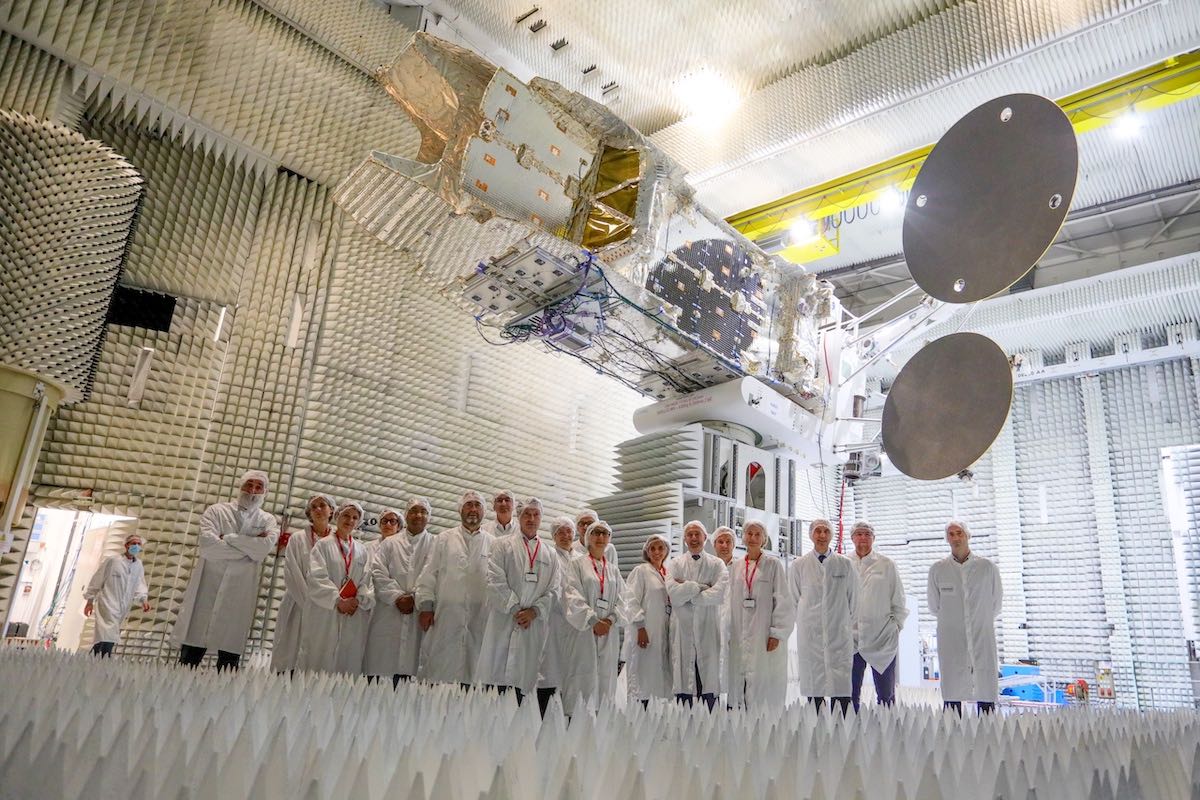 A 12,000-pound European broadband communications satellite designed to beam internet signals to airplanes and ships is ready to rocket into a high-altitude orbit from Cape Canaveral Tuesday night, marking the 11th and final flight for SpaceX’s oldest active Falcon 9 booster. The rocket will devote all of its lift capability to deploying the Eutelsat 10B satellite into as high of an orbit as possible.

The Eutelsat 10B satellite is buttoned up for launch inside the nose cone of the 229-foot-tall (70-meter) Falcon 9 rocket. Liftoff from pad 40 at Cape Canaveral Space Force Station is set for 9:57 p.m. EST Tuesday (0257 GMT Wednesday), but there’s just a 20% probability of favorable weather for launch, according to the official outlook from the U.S. Space Force’s 45th Weather Squadron.

A launch attempt Monday night was scrubbed a couple of hours before liftoff to “allow time for additional pre-flight checkouts,” SpaceX said.

A few miles north of pad 40, SpaceX is readying a different Falcon 9 rocket for launch Tuesday from Kennedy Space Center on a resupply mission to the International Space Station. The weather forecast for that launch, set for 3:54 p.m. EST (2054 GMT) Tuesday, is also iffy with a 30% chance of acceptable conditions for liftoff.

Eutelsat 10B will deploy from the Falcon 9 rocket’s upper stage about 35 minutes after launch. The rocket will aim to release the spacecraft into a “super synchronous” transfer orbit with an apogee, or farthest point from Earth, well above Eutelsat 10B’s final operating altitude of 22,000 miles (nearly 36,000 kilometers). The target apogee for the Eutelsat 10B mission at spacecraft deployment will be above 37,000 miles, or about 60,000 kilometers, according to Pascal Homsy, Eutelsat’s chief technical officer.

Instead of reserving some of its propellant for landing on a drone ship, the Falcon 9’s first stage booster will burn its nine main engines a few seconds longer than usual, giving an extra burst of speed to the rocket’s upper stage. That will allow the Falcon 9’s second stage engine to place the Eutelsat 10B satellite into a higher orbit than would have otherwise been possible.

SpaceX still plans to retrieve the two halves of the Falcon 9 rocket’s payload fairing for refurbishment and reuse.

A spokesperson for Thales Alenia Space, the manufacturer of Eutelsat 10B, said the deployment of the satellite into a super synchronous transfer orbit will shorten the time needed for it to reach its final operational geostationary orbit by about 10 days. Based on Thales’ Spacebus Neo satellite platform, Eutelsat 10B will use plasma thrusters for the orbit adjustments needed to circularize its orbit at geostationary altitude 22,000 miles over the equator, where it will circle Earth in lock-step with the planet’s rotation.

The expendable Falcon 9 mission will be the third time this month that SpaceX has disposed of a Falcon rocket booster, following the intentional disposals of a core stage on a Falcon Heavy rocket Nov. 1 and a Falcon 9 booster on a mission Nov. 12. The Nov. 12 mission lofted two communications satellites for Intelsat, which said it paid a premium for the extra performance from the Falcon 9, resulting in the booster’s disposal in the Atlantic Ocean.

“The reason why Eutelsat choose an expendable booster for this mission is because of the mass of the satellite, which requires the full capacity of fuel and extra performance of the Falcon 9 rocket and a proper orbit injection,” Homsy told Spaceflight Now in response to written questions.

Homsy declined to say how much, if anything, Eutelsat paid SpaceX for the additional performance from the Falcon 9 on the Eutelsat 10B mission.

Once in geostationary orbit next year, Eutelsat 10B will steer itself to an operating position along the equator at 10 degrees east longitude. The satellite will add capacity for internet connectivity services for airplanes and ships across the highly-trafficked North Atlantic corridor between Europe and North America. Eutelsat 10B will also provide similar services over Europe, the Mediterranean basin, and the Middle East, according to Eutelsat, the satellites Paris-based owner and operator.

Eutelsat 10B carries two multi-beam high-throughout Ku-band payloads for aviation and maritime internet services. These two payloads have 116 spot beams capable of processing more than 50 GHz of bandwidth, and offering a throughout of approximately 35 gigabits per second, Eutelsat said.

The satellite also hosts two wide beam C-band and Ku-band payloads to extend services currently provided by the aging Eutelsat 10A satellite, which launched in 2009.

Eutelsat 10B is scheduled to enter service in the summer of 2023, Homsy said.

The launch of Eutelsat 10B marks the fourth large Eutelsat communications satellite to launch in the last two-and-a-half months, beginning with the Eutelsat Konnect VHTS satellite which launched in September on an Ariane 5 rocket. Two Hotbird TV broadcasting satellites joined Eutelsat’s fleet after launches from Florida on Falcon 9 rockets in October and earlier this month.

“Quite a challenge for the Eutelsat engineering teams, who have been up to the challenge,” Homsy said.