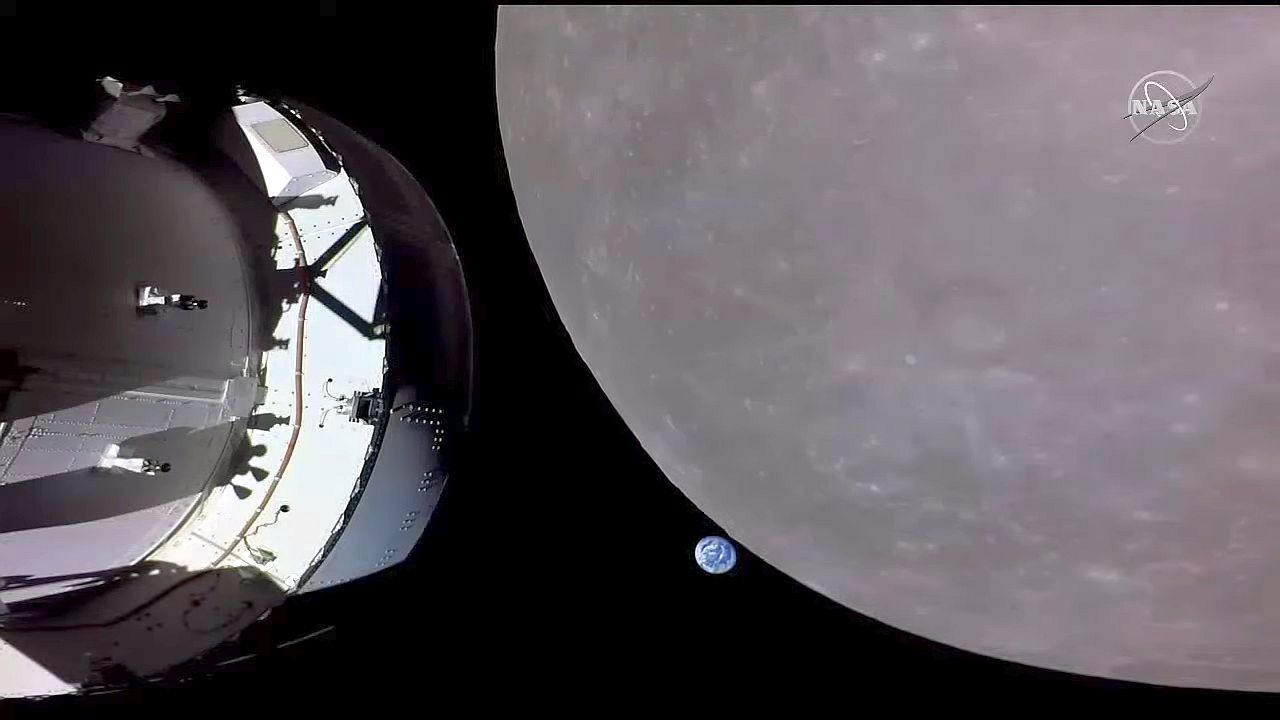 NASA's Orion spacecraft flew to within 130 km of the Moon's surface on Monday morning after executing one of the most demanding maneuvers of its 25-day mission.

Since launching on top of the Space Launch System rocket last Wednesday, Orion's European Service Module had conducted four "trajectory correction burns" on the way to the Moon. These were brief firings of the service module's main engine, an Aerojet-built AJ10 engine. However, the propulsion system faced a stiffer test on Monday as part of a maneuver to enter orbit around the Moon. It passed with flying colors.

The AJ10 engine burned for 2 minutes and 30 seconds as Orion passed behind the Moon, out of contact with NASA back on Earth. When Orion reemerged from the lunar shadow, all was well, and the spacecraft was positioned to reach its temporary destination—a distant retrograde orbit around the Moon.

The orbit takes its name from the fact that Orion will be at times distant from the Moon, as far as 90,000 km away, and traveling in a retrograde manner, meaning the spacecraft will orbit the Moon in the opposite direction that the Moon orbits the Earth. NASA selected this orbit because it will allow engineers to spend more time testing spacecraft systems such as guidance, navigation, communication, and power in deep space. These activities will push the limits of Orion before astronauts fly on board the vehicle during Artemis II in a couple of years.

To enter a distant retrograde orbit, Orion will perform a second burn of its main engine on Friday, November 25. The spacecraft is due to splash down in the Pacific Ocean on December 11.

Things are going mostly well with Orion on this flight, although mission managers are working on two issues. One team of engineers is assessing the star-tracker system on Orion to understand several faults in the random access memory, which so far have been able to be resolved by cycling power to the system. A second team is analyzing one of eight units located in the service module that provides solar array power to the crew module. This unit—called a power conditioning and distribution unit umbilical latching current limiter—has, on many occasions, opened without a command. It was able to be closed, and so far, there have been no mission impacts.

NASA officials will hold a teleconference with reporters at 5 pm ET (22:00 UTC) on Monday to discuss these issues. These officials, including Artemis I Mission Manager Mike Sarafin, will also be asked about damage to the launch tower that supports the Space Launch System rocket during fueling and just before liftoff.

Several sources have told Ars that damage to this $1 billion structure was "far greater" than anticipated during the massive rocket's launch. NASA, so far, has been mum on the extent of the damage.