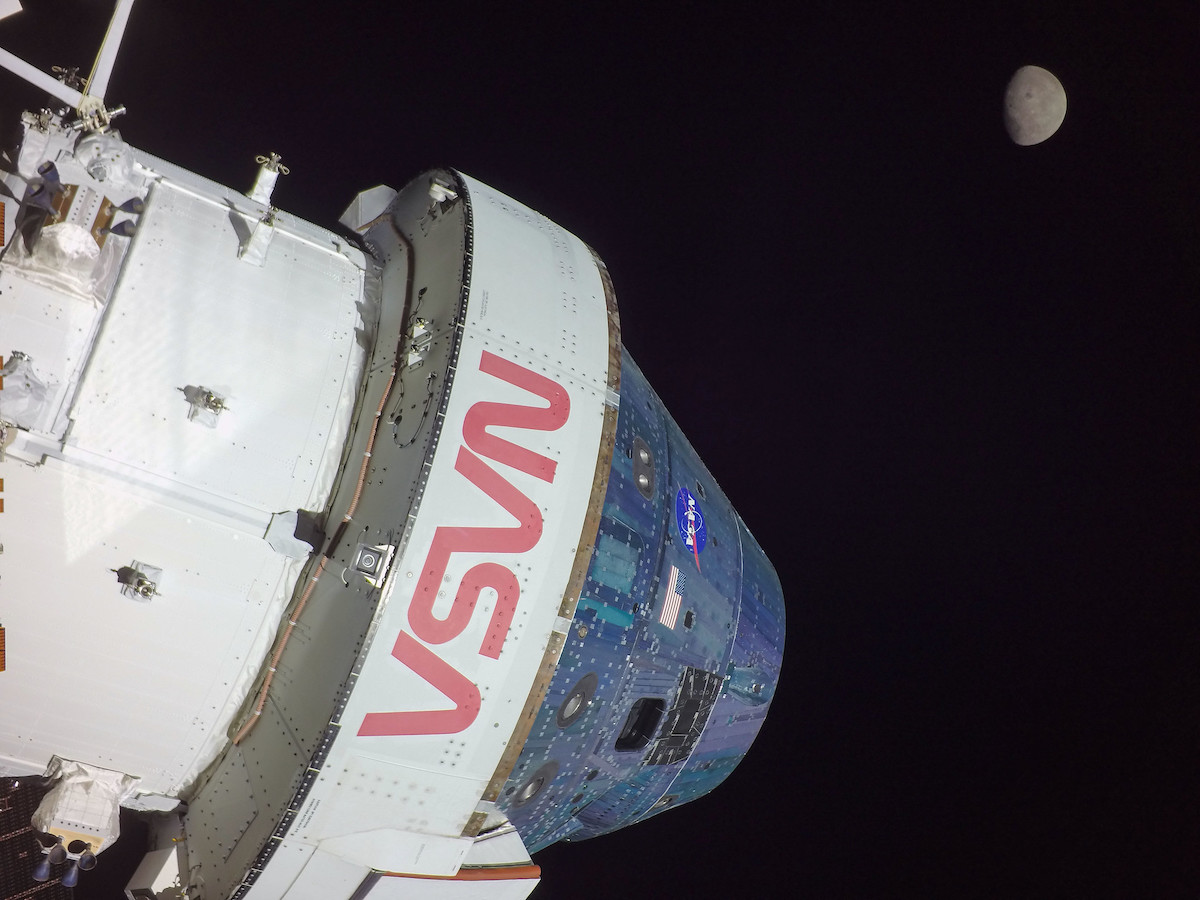 NASA’s unpiloted Orion moonship, sailing smoothly toward a remote lunar orbit after a spectacular low-altitude flyby Monday, is operating in near-flawless fashion, mission managers reported Monday, out-performing expectations on a flight needed to pave the way toward the first piloted mission in 2024.

An analysis of the huge Space Launch System rocket that boosted the Orion capsule on its way early Wednesday showed it performed almost exactly as expected, taking off atop 8.8 million pounds of thrust and producing a ground-shaking shock wave that literally blew the doors off launch pad elevators.

The core stage’s four upgraded space shuttle main engines and twin solid-fuel boosters propelled the 322-foot-tall rocket out of the atmosphere and into space almost exactly as planned. At main engine cutoff, the SLS was within 3 miles of its target altitude and within 5 mph of the predicted velocity.

“When you think about the size of the system that we have and how much performance it puts out when the engines are full at throttle … the core stage engine shutdown missed by seven feet per second, which is simply remarkable,” said Artemis 1 Mission Manager Mike Sarafin.

The rocket’s upper stage provided a trouble-free boost out of Earth orbit, sending the Orion spacecraft on its way to the moon.

“The vehicle continues to operate exceptionally, we have seen really good performance across the board on all our subsystems and systems, and certainly really happy with the performance,” said Orion program manager Howard Hu. “Today was a terrific day.”

He had reason to be pleased. Early Monday, the capsule reached its target, using its main engine to set up a low-altitude flyby that carried the spacecraft within about 80 miles of the lunar surface.

Cameras mounted on the tips of the spacecraft’s solar arrays captured stunning views of Earth, looking like a blue-and-white marble in the deep black of space, slowly setting on the lunar horizon as the spacecraft sailed out over the far side of the moon and out of contact with flight controllers.

Using the moon’s gravity to fling it back toward deep space, the Orion sailed directly over the Apollo 11 landing site in the Sea of Tranquility before heading out toward the intended “distant retrograde orbit” that will carry it farther from Earth than any previous human-rated spacecraft.

“In terms of overall system failures, we haven’t seen a single thing on the rocket or on the spacecraft that would have caused us to question our reliability or our redundancy, which is why this has largely been a nominal mission,” Sarafin said.

“There have been a number of things where our plans and our predicts didn’t quite match what we thought from an engineering and from a modeling standpoint … but overall, it’s been largely a green-light flight.”

That said, engineers are wrestling with two relatively minor glitches: engineers have to periodically restart the capsule’s star tracker navigation sensors after unexpected automatic resets; and an issue with an electrical power distribution system component. Neither is expected to affect the mission.

Looking ahead, the Orion must execute another critical engine firing Friday to actually enter the planned distant retrograde orbit, then carry out a third burn December 1 to break away from that trajectory. A fourth engine firing December 5 is needed to set up another close lunar flyby.

That burn, the “return powered flyby” maneuver, will slingshot Orion back toward Earth for a high-speed re-entry and splashdown in the Pacific Ocean west of San Diego on December 11.

Asked how he felt about the mission given its smooth, relatively problem-free start, Sarafin said “we are on flight day six of a 26-day mission, so I would give it a cautiously optimistic A-plus.” But he quickly added, “we’re taking it very seriously. I will rest well on December 11, after splashdown and recovery is complete.”