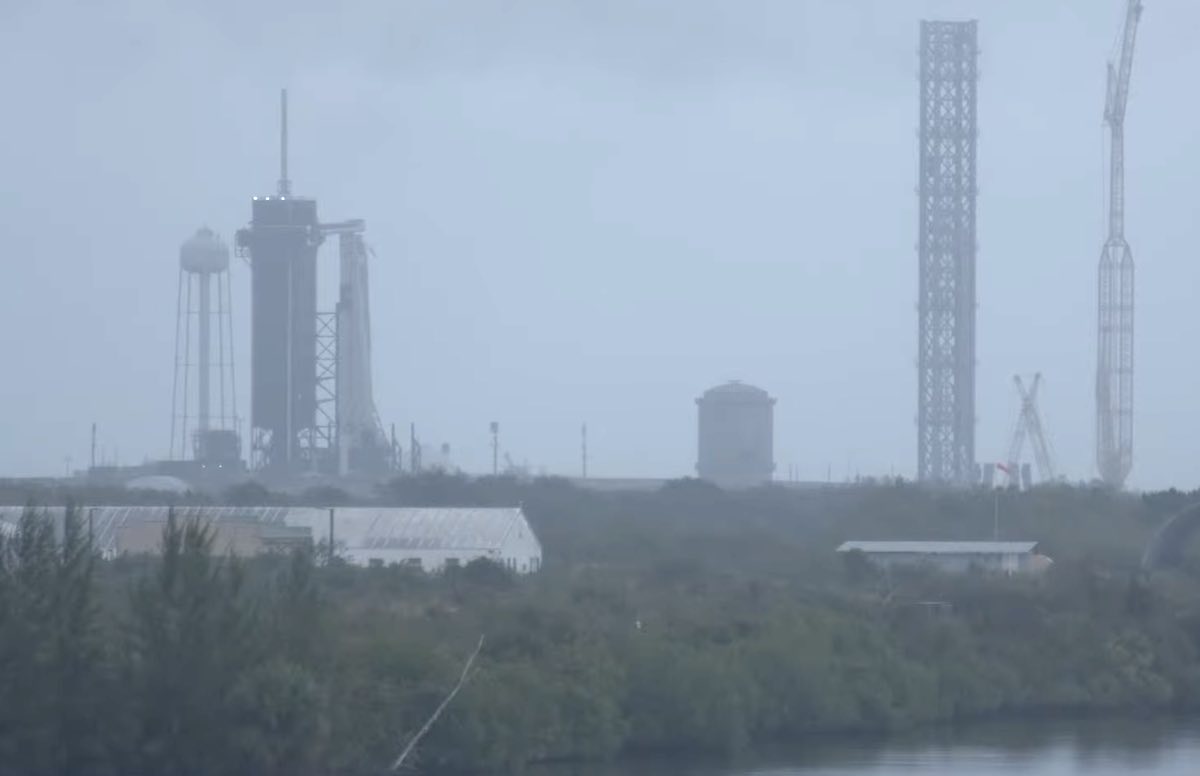 Live coverage of the countdown and launch of a SpaceX Falcon 9 rocket from Launch Complex 39A at NASA’s Kennedy Space Center in Florida. The Falcon 9 rocket will launch SpaceX’s 26th resupply mission to the International Space Station. Follow us on Twitter.

SpaceX called off a launch attempt Tuesday due to bad weather at Kennedy Space Center, delaying until Saturday the start of a resupply mission to the International Space Station.

The 26th SpaceX cargo mission to the space station, called CRS-26, will deliver about 7,700 pounds (3.5 metric tons) of supplies, experiments, and hardware to the complex.

There was just a 30% chance of good weather at Kennedy Space Center for an instantaneous launch opportunity at 3:54 p.m. EST (2054 GMT). Despite light rain and low clouds, SpaceX began loading propellants into the two-stage Falcon 9 rocket in hopes weather would improve in time for liftoff. But it didn’t, and SpaceX’s launch director declared a scrub for the countdown a few minutes before launch time.

Because Dragon spacecraft has a heat shield to protect it during re-entry at the end of the mission, the mission cannot launch during a rain shower because water droplets could damage the capsule’s thermal protection system.

The next launch opportunity is scheduled for no earlier than 2:20 p.m. EST (1920 GMT) Saturday. SpaceX will not be able to launch the cargo mission around the Thanksgiving holiday, a period of busy travel in the United States, because the Federal Aviation Administration wants to ensure airspace is clear for commercial airline traffic.

Assuming the Dragon capsule takes off Saturday, it will dock with the Harmony module on the International Space Station at 7:30 a.m. EST (1230 GMT) Sunday. Astronauts on the space station will open hatches and begin unpacking cargo inside the pressurized compartment of the Dragon spacecraft.

When it lifts off, the Falcon 9 rocket will head downrange northeast from Kennedy, powered by nine Merlin engines generating 1.7 million pounds of thrust. The rocket will shut down its first stage booster about two-and-a-half minutes into the mission, allowing the booster to descend to landing on a drone ship about 186 miles (300 kilometers) downrange in the Atlantic Ocean about seven-and-a-half minutes after liftoff.

The booster, tail number B1076, is making its first flight to space on the CRS-26 mission. The Dragon capsule, also brand new, will deploy from the Falcon 9’s upper stage about 12 minutes after liftoff to begin the journey to the International Space Station.

Helium pressurant will also flow into the rocket in the last half-hour of the countdown. In the final seven minutes before liftoff, the Falcon 9’s Merlin main engines will be thermally conditioned for flight through a procedure known as “chilldown.” The Falcon 9’s guidance and range safety systems will also be configured for launch.

After docking of the new cargo capsule, astronauts at the space station will open hatches and unpack supplies, experiments and other equipment stowed inside the Dragon spacecraft’s pressurized compartment. At the end of the mission, the reusable capsule will undock from the station and head for a parachute-assisted splashdown off the coast of Florida in early January with several tons of cargo.

The payloads on-board the Dragon capsule include two new ISS Roll-Out Solar Arrays, or iROSA units, to upgrade the space station’s power system. Astronauts on the station will venture outside the complex next week to help install and deploy the new roll-out arrays, which will augment power produced by the station’s original solar arrays. The existing solar array wings launched on space shuttle missions between 2000 and 2009.

The solar arrays are rolled up on spools like yoga mats during launch. The space station’s robotic arm will remove the spools from their mounting posts inside the Dragon spacecraft’s rear cargo bay and move them to attachment points on the lab’s left-side and right-side solar power truss.

The roll-out solar panels will open up to partially cover the existing arrays. This pair of iROSA units follows the launch of the first two in 2021. The final two roll-out solar arrays are scheduled to launch on a SpaceX resupply mission next year.

Other cargo on the CRS-26 mission includes experiments to test the growth of dwarf tomatoes on the space station, a portable hand-held microscope that will help astronauts collect medical imagery of their own blood samples, and a technology demonstration to gather data on the construction of flexible structures in space.